Airtel Xtreme’s android-ios application catered to a major target audience of tier 2 and tier 3 cities, which composed of mobile natives and users who engaged with mobile more than desktop as compared to their tier 1 counterparts. While Airtel Internet TV STB, required to cater to a consistent experience for different user personas which consumed both online and live content through internet TV. Keeping this in mind, Airtel required a digital presence that could entail providing a seamless experience across both Mobile, TV and Desktop for the entire demographic.

Apart from a major chunk of people being mobile users, most people engaged in only airtel live tv, creating occasional and seasonal traffic. The business envisioned a product revamp, which could tract more users to engage with airtel services, increasing their user base while also becoming a market leader in digital engagement through a progressive upgrade in their product and approach. Thus a journey to revamp the UX for different versions of the AIT TV, UI deployed across 3 different Internet STB hardware versions, HDMI dongles and web app was initiated.

To embark on a journey of User Centered Design, we ensure to collaborate and create a common understanding through aligning with all stakeholders. With Airtel, the initiative to build the different platforms ground up began with a meeting to understand the current product, vision, challenges, traffic stats with all the key stakeholders of the team. Since Airtel wanted to bring consistency across all their products, in order to create the baseline airtel experience, this meeting served in aligning and creating a common vision.

Our team worked on creating concepts based on existing domain knowledge and key insights gathered from the product and research team to set the design direction and put the design strategy in place. Post the iterations of suggested concepts, the visual and Html development were created, aligning with our design strategy while bringing out the implementation in actuality, to delight!

A key approach in this project was the idea of taking a Mobile-first Approach, which ensured that implementation could render the platform to be most easily useful and delightful for its mobile users. 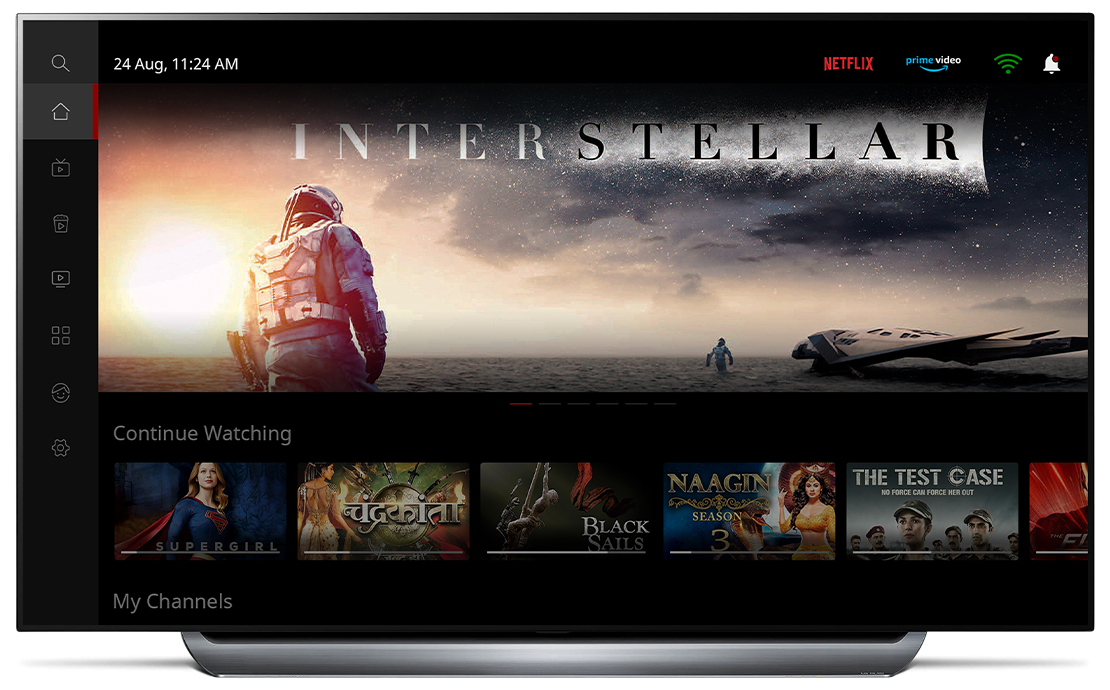 Key personas were created such that business groups now converse to each other for features or functionalities, by referencing these personas.

The navigation menu was changed from a horizontal to a vertical approach to focus more on the content. This established a unified design approach, where both the connected STB and the TV dongle, deliver the same TV UI. Further, the nomenclature of certain terms like Live TV, were changed to more Indian user-friendly terms like TV Channels.

The UI was designed in a way to allow a seamless experience when switching between Live or Online TV. The asset sizes across sources and content providers were unified to allow mixed content rails and create a consistent UI. 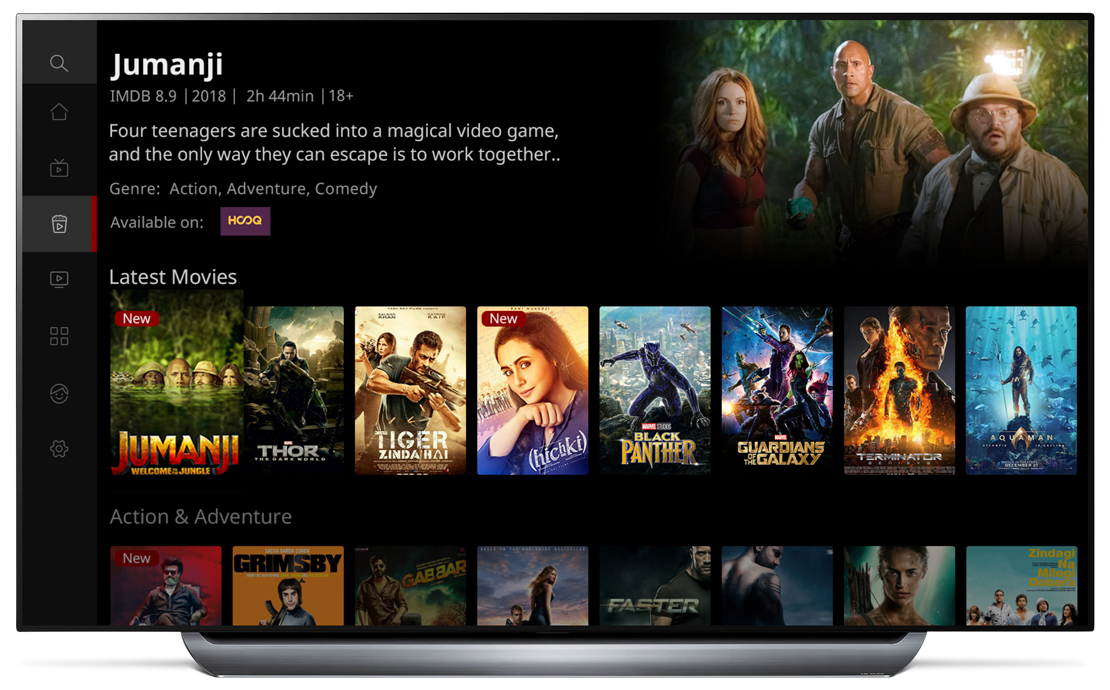 Standardization of grid across EPG, Zap and Settings was incorporated along with providing profile support for channels and favorites. Dual-band transponder based recording support allows one to view a channel while recording another.

For Airtel XStream, quick onboarding was made possible via a mobile app and cart like single payment flow for multiple OTT apps was maintained. Integration of Wynk music content was incorporated along with the power of voice-based search enabled via Google assistant. 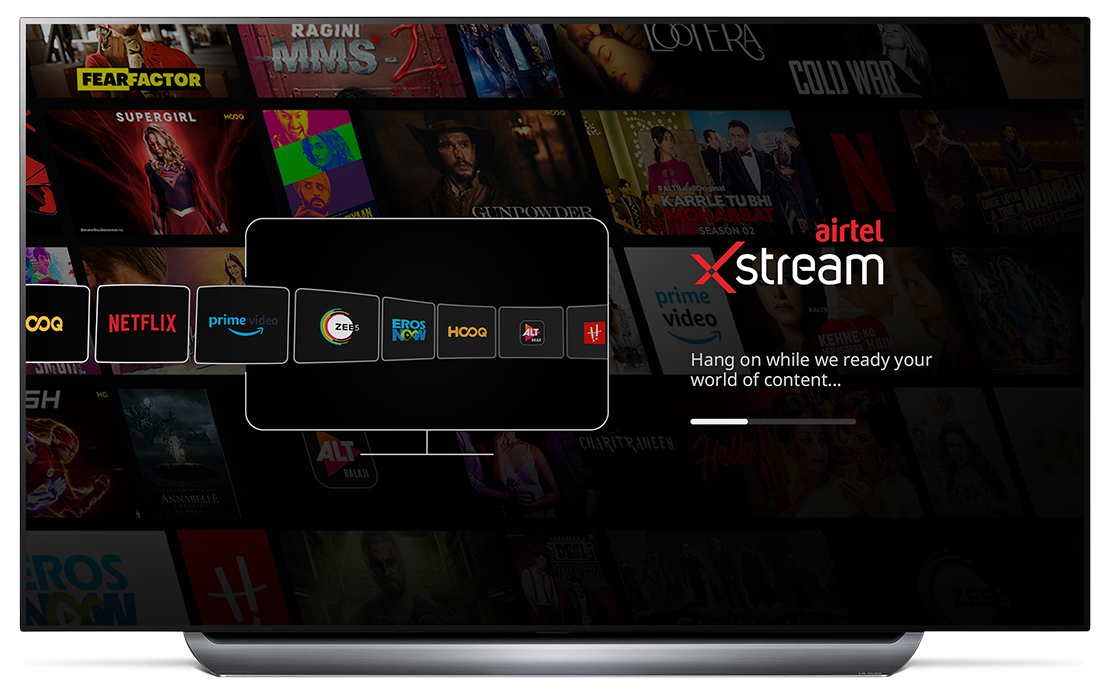 The Player UI varies as per the device on which the content is consumed. The controls on the player, when viewed on mobile, change into two-sided controls for ambidextrous usage on mobile in landscape view. Additionally, for mobile devices, there is WhatsApp integration for sharing along with the more common social sharing options available.

The EPG for the Live TV section integrates a mini player so that the user does not lose the context of ongoing content while browsing. This leads to a seamless experience of viewing and browsing, much like the traditional TV UX.

In order to account for the different asset sizes received from traditional broadcasters and online content providers, a unique mosaic tile grid was proposed. This grid allows for a mixed recommendation bag from both the content sources for the end-user. 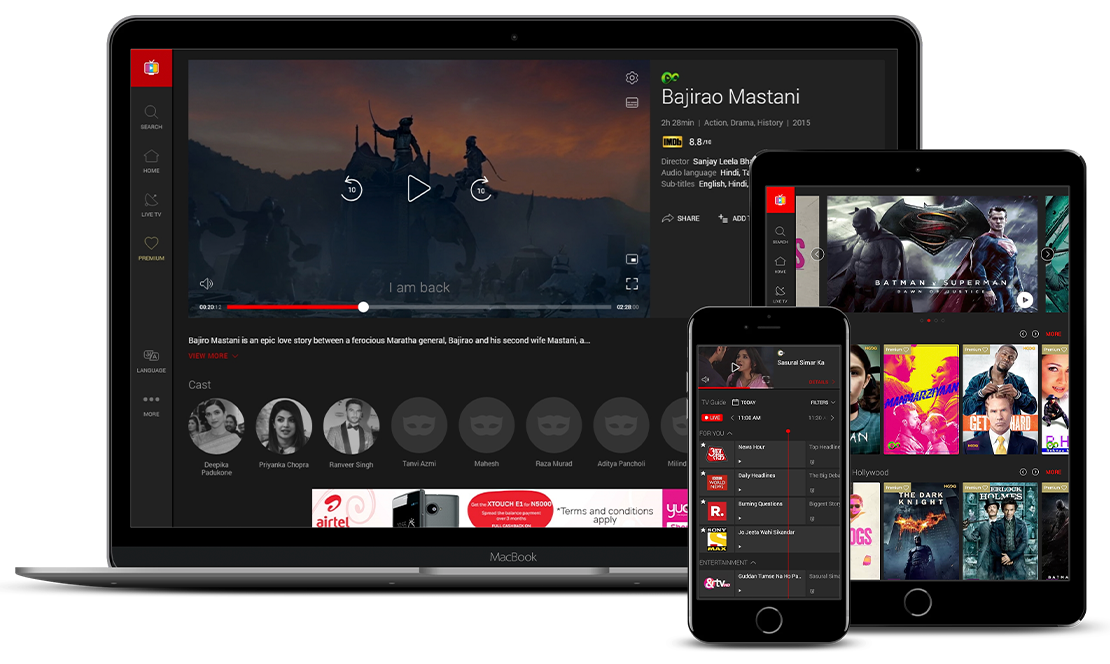 The entire entertainment ecosystem of Airtel XStream was launched in September, 2019 pan India. Below are some of the links of news releases.